30 Days of Advocacy Against Witch Hunts

I'm sure you have read the stories, innocent people being beaten, maimed and murdered, in Africa,  because they are thought to be witches. They are not witches. Like many before, they are helpless, outcast, victims of someone's perversion of religion. Please add you voice to protest these human rights abuses.
http://www.paganrightsalliance.org/30_days.html

I have forwarded my letter as recommended at the above site. If you wish to add your signature, all you have to do is copy and past, then email the letter as directed.


In addition, as suggested,  I will be lighting a candle each day, beginning today, March 29, through April 27 in memory of the many victims - children, women, men - who suffered horrible and violent deaths at the hands of maniacs killing in the name of their god. I cannot even imagine the terror of these people - the children tortured and killed, an elderly woman doused with kerosene and set on fire after being tortured. Can this really be happening in this day and age? Yes, it is happening and we all must do what we can to stop it.


Even if you are not Pagan or a witch, I know you cannot condone these horrors. Please, let yourself be heard, add your voice. Click on the link above for more information about what you can do. Tarot for the Week 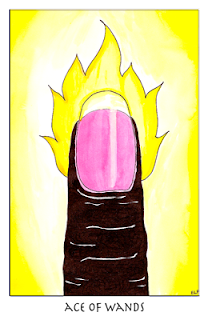 OK, so I'm a tarot card junkie, what can I say? I can't seem to help myself when it comes to collecting decks. This is a new deck for me - yes, another -  Tarot of the Crone by Ellen Lorenzi-Prince. The art is rather primitive, I've seen many more beautiful decks, however, this is a deck of powerful images and energies for me, something I have been searching for. It fits well with my Dianic practice and has a more feminist approach to tarot.
I generally pull a card for the week on Mondays . I pulled the Ace of Wands  - the image (above) is a woman's finger with a flame from the tip. Since there are a number of ideas stirring in my head, I take this as validation that I need to move forward with them. This Ace is a magickal wand of sorts, as Eileen says in her guide, a seed and root of my own power which I need to claim. On a personal level, it makes sense. This week I will be presenting a program at the local CUUPs group - part of this is taking up my place as part of the community - which I am resistant to do. Why?  Wands are generally about creativity, growth and inspiration. Perhaps what I do will inspire some of those who attend and in return, I will step a bit into the circle of that community.
This card is also about the potential for healing, progressing forward and things turning around for the better. I can see where this may lead so it looks like a good week ahead and moving forward with certain projects and needs. 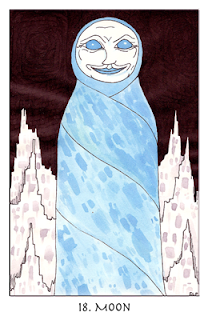 In addition to this card, I noticed that instead of pulling just one card, I had pulled two - the Moon - interesting in that this card is about the Moon opening the door to the Otherworld and "the power of dreams that go further than imagination. She rules the ghosts of one's past and those things that have died or not yet been born" - a most interesting interpretation of this card which really resonates with me. The booklet advises that not all that is buried is treasure under the light of the Moon, I may unearth my pearl beyond price - oh... been there, done that before - I'll survive and it will be worth it. Since I am doing some oracle work, I will have to be careful to keep control as that work may try to take over and demand all of my time. In certain respects, this situation started last week and I've had to set boundaries already, so again, I can see what this card is trying to show me.
I chose one more card just for the heck of it - the Beast of Wands - a black cat walking through what appears to be flames or flaming grass. Black cats are associated with witches and wands, fire - add to that all my Leo energy. This card comes to me re-enforcing that need and desire to move forward, taking what I want "using simple natural strength." I can make things harder than they have to be sometimes, I need to let that go and just do what needs to be done, naturally. I have what I need to do so. 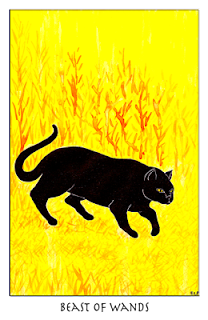 Indeed, an interesting week filled with possibility, passion and creative energy. The warnings and validation are always helpful to me. I need to trust not only in my ability to interpret, but the information I am being given. Some folks always trust tarot and live by it - I am more skeptical - which is a good thing. When reading for myself I have to feel deeply the information I am being given, that it is not wishful thinking. Sometimes it takes a day or two for me to process. Reading for others tends to be easier and without any resistance - the information is there, I interpret and trust in my ability. I have discussed this with others who read for themselves and experience the same issues.
I hope your week is as interesting as mine looks to be.


Eileen's website:    http://croneways.com/index.html
Here's where I purchased the deck and where you can see all the cards:  http://tarotconnection.net/shop/index.php?main_page=product_info&cPath=1&products_id=17 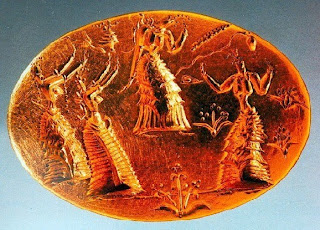 (compiled from various sources including Diane Stein's The Goddess Book of Days and The Reformed Congregation of the Goddess calendar calendar created by DeAnna Alba)
As the pantheon I am dedicated to is Greco-Roman, it is a busy time for my priestess duties!
Blessings nine!
at 4:20 AM No comments:

The new Jane Eyre film opens today! I can't wait to see it. I've been watching clips and reading reviews, opinions, etc. - it looks wonderful to me. Of course my favorite Rochester is Ciaran Hinds. He replaced Timothy Dalton, from the  1980s Masterpiece Theatre version, in my affections - OK, well, not replaced, Dalton was a fabulous Rochester, but Hinds, well, there is just something more Rochester about him! Of course I liked the Masterpiece 2006 version too - Toby Stephens was very good, although he seemed too young and handsome to be Rochester and Ruth Wilson was an excellent Jane - a very favorite Jane. Still, Ciaran Hinds is my all time favorite Rochester - a perfect Rochester if ever there is one. As you can see, I'm much more concerned with Rochester than Jane, LOL!
Enjoy the clip - don't forget to turn off my play list at the bottom of the blog!
Also watch  more clips here:  http://www.focusfeatures.com/jane_eyre/videos/
Blessing! nine!
at 11:20 AM 5 comments:

Take this link over to the Folkways Notebook blog for an interesting post about the Women's Land Army during the Great War (WW 1) and a YouTube video about women's history month. 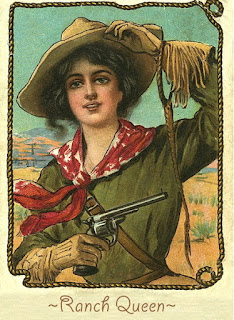 (Be sure to scroll down and turn off my playlist so you can listen to this)
A film by Max Dashu, creator of the Suppressed History Archives (http://www.suppressedhistories.net/) . She mentions, briefly, some statues found in Southern Appalachia, which caught my attention since I am interested in the folklore and history of Appalachia. I'd like to learn more about them. Enjoy!
Blessings nine!
at 9:20 PM 4 comments: 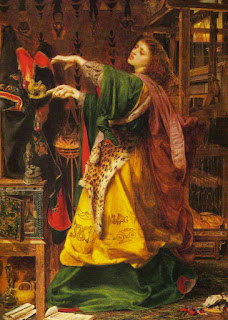 Morgan le Fay by Frederick Sandys
Put on your raincoats, the shit will now hit the fan!