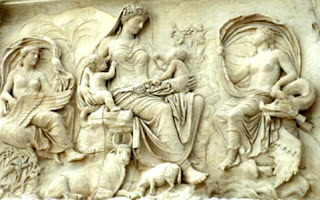 Tomorrow, June 11, is the Festival of Mater Matuta. She is a Roman goddess of fertility and childbirth, motherhood, growth, and the raising of children. She has been associated with other goddesses, most notably Aurora, but this was because of something written by the Roman poet, Lucretius. She was worshiped widely throughout the Roman Empire and a temple was built in Her honor in Rome.

There is some conflicting information about how Mater Matuta was honored. I have read that only women who were married for the first time could participate in Her rites. The women also could only pray for their sisters' children and not their own. Interesting.

So... how do I honor Mater Matuta? Well, I don't have any human children, fur babies only. I do however have a niece and nephews, so I ask for Her blessings to be bestowed on them, as well as the children of friends, and all children throughout the world. This harkens back to when I was a very little girl and, like a good little Catholic child, I said my prayers every night. I used to spend a very long time asking God to watch over, forgive, and bless everyone I knew. I even asked God to forgive my parents because they were always kissing and hugging, and... well I suspected something else, LOL. This is a sweet little memory. However, since I suffered from anxiety, I was always worried about leaving someone out. I finally just asked God to bless everyone in the world and that took care of that problem. Rather an intelligent way to solve the problem for a 6 year old. And that's what I do now during my prayers to Mater Matuta; I simply ask for Her blessings on everyone; after all, we are are all someone's child.

I usually make an offering of cake and a libation of honey-sweetened milk. This has no historical basis, it just simply feels right to me. I also light a white candle for all children and a red candle for Mater Matuta; again, just because it feels right.

So, tomorrow night, make blessings and prayers for the whole world.

Just a reminder, the Vestalia began on the 7th of June and is celebrated through the 15th. My coven will perform our rites on Saturday night. Don't forget to honor Vesta and Her priestesses.