A Web of Silk!

This is so incredible - a cape, as well as another garment, made of actual spider's silk - millions of female Golden Orb spiders and not one injured - they are released back into the wild after the silk is collected. This fabric took thousands of hours to weave and embroider, three years. Amazing and beautiful.

The spider is one of my totem animals and plays an important part in some of my magickal workings. Of course, I also weave - wouldn't I love to get my hands on some of this silk - oh the possibilities!

Be sure to turn off my music player at the bottom of the page.

Today is the celebration of the Birth of Inanna. A Summerian Goddess, Her name means Queen of Heaven and She is a goddess of love, fertility and war. Her myths and stories are easily found through various books and internet search engines so I won't go into great detail here, just briefly share Her myth. What I really want to share is how I honor Inanna on this day and what She has given me.

Briefly, when Inanna descends into the Underworld to reluctantly visit her sister, Eriskegel, a sister She was not close to, it was to offer compassion and comfort.  Eriskegal's husband, in one myth, has abandoned Her; in others, He has died. She is mourning his loss, angry, suffering. As Inanna descends, She is required to leave, at each of the seven gates a piece of Her attire, Her crown and then Her clothing. She arrives at Erishkegal's throne, naked and vulnerable. Again, there are various interpretations of the myth - Eriskegel, fearing that Inanna has come to usurp Her role as the ruler of the Underworld, kills Her. In other myths, Eriskegel is so angry because Iananna has never visited Her before and, in that anger and grief, She impulsively kills Her sister. In any event, Inanna dies and Her corpse is hung at Eriskegel's throne. When Inanna does not return after three days, a servant goes to Enki, Her father, and tells Him what has happened. He creates two creatures from the dirt beneath His fingernails, sending them into the Underworld with the Food and Water of Life. They offer compassion to Erishkegel, who is comforted and grateful for this, offering them whatever they want. They ask for the corpse hanging on the wall which She gives them. They proceed to revive Inanna with the Food and Water of Life. Inanna then asks that She be allowed to return to the World and Eriskegel consents, but only if someone will return to take Inanna's place. Inanna agrees.

When She returns to the World, Inanna finds that Her own beloved husband, Dumuzi, instead of mourning Her, has usurped Her throne. In Her anger She sends him to the Underworld to take Her place. However, as She considers this and calms Herself, She realizes that She has made a mistake and wants him back. Eriskegel has also had time to consider and realizes that Inanna had come to visit to offer comfort, so She agrees to release Dumuzi, but because the Underworld is what it is, he can only return home for half the year. Each year Inanna must return to Eriskegel's world to revive him, renew Her own vitality and return to the Earth each Spring to bring fertility and life to the Land.

There are many lessons in Inanna's myths. At this time, in celebration of Her birth, I embrace the Winter to make my own descent into the Underworld and within myself. I make a conscious effort to cast off seven issues that I may be over-focusing on, allowing them to be released for a time, setting them into the Earth to lay sleeping. I then recovered them, renewed and revitalized, even changed in whatever way needs changing, later in the Spring.

At times I need to just stop, let go and stop worrying. This ritual assists me in doing this. These issues are not issues that must be permanently released, but issues that need restoration, ideas that need revitalization. In Inanna's honor I do this as She is wise, inspiring and knowing. Perhaps She left Her myth as an offering for our healing and regeneration. Perhaps that is nature of all goddess myths. 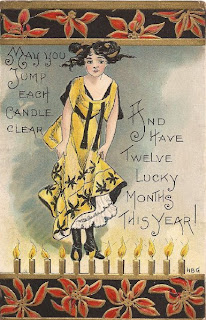 Blessings to all for a magickal and joyful
New Year!