To Be A Witch 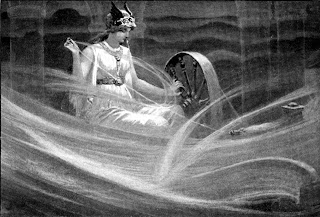 To Be A Witch
by Robin Artisson

Witchcraft is a calling, from an unseen region of experience,
a place that is the source of our human legends and myths,
but is itself a non-human place and power.
Its calling is inexorable; it cannot be ignored long.

To be a witch is to be in the grip of something that words cannot express,
but sometimes a storm or a tree can express it.

To be a witch is to feel more at home with animals
and trees and quiet places on the Earth
than with masses of humans and noisy cities.

To be a witch is to learn real magic - sorcery, more like -
first from books or the whispered stories of others,
later from faceless beings from the Unseen.
And that's when real sorcery is born in you.

Sorcery is the merging of the Seen and the Unseen,
using you mind and body as the vehicle of that merging.
When everything comes together, anything seems possible.
But everything has a price, too.

To be a witch is to be fascinated by life,
while always holding inside
a fascination for your own death -
"thus comes the mystery."

To be a witch is to know the hidden messages
in folklore and so-called superstitions,
and to know what humans really should fear.

To be a witch is to feel like an animal,
sometimes as much as you feel like a human,
and to feel like something neither human nor animal,
at other times.

To be a witch is to exist without an easy explanation
for who or what you might be
or where you came from,
or where you are going.

Robin Artisson is the person who introduced me, via the internet and his wonderful writings, to a more traditional witchcraft than ever I had known. Considering that I had been taught something very non-Wiccan, older and more traditional, that says something about him. He opened portals, introduced other writers, made me think and go off across the hedge. He taught me so much and I am forever grateful. He also introduced me to Robert Cochrane, and very different ways of the workings of this arte. Robert Cochrane made as much an impression upon me as Robin himself; unfortunately Robert Cochrane died in 1966, but his small collection of writings has inspired many. Strange, you may think, for someone who has long considered herself a Dianic Feminist witch, to be so influenced by men. Of course, they are not the only ones; the Hidden Company, the trees, the stones, the Land, the Spirits of these, all tend to my education. However, I am a smart witch, I take my wisdom from wherever it comes.

Robin has been around for many years now, controversial, loved, worshiped, and despised. He is human, with all that carries, but he is a mystic, a cunning man, a wise man, herbalist, healer, seer, a witch. I have watched him grow into his wisdom, always there, but needing the tempering that time would bring; and so it has.

Robin has published a number of books; I highly recommend them each one; they are all in my own library, well used. His websites overflow with articles free for your perusal. Take advantage of his generosity, learn, think, take flight.

And, my most favorite place:
http://www.robinartisson.com/wy/elfhame/meadows.html

Many thanks to Robin for allowing me to share "To Be A Witch" on my blog.

For the month of October, I will post, almost daily, a collection of poetry, images, both magickal and mundane, spells, perhaps, and whatever else catches my fancy, that is relevant to this mystical season. I hope you enjoy the posts and share the thoughts they inspire. 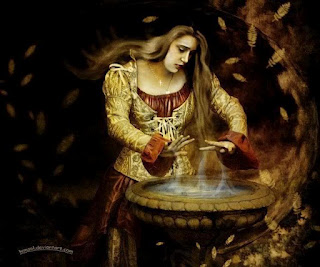 The season marches on and we enter that time where we walk between the worlds more than usual, without conscious intent to do so. We are carried away, not against our wills, but perhaps without consent. Visions, dreams, the gathering of the harvest of wisdom, these things are more fully realized now, during this season. That is the way of the witch, the sorceress, the priestess.

I am experiencing changes beyond what I had thought possible. While I have always considered myself to be a Dianic/Feminist witch - when I have had to label myself - I find now that this label may not be an accurate one.

Apollon, who has always maintained a presence, be it distant, in my life, has stepped forward, no longer willing to remain in the background of my spiritual practice. Along with Him, Ares and Hades, have reached out, into my mind, making Themselves known. And those Goddesses I am dedicated to, They are there, beckoning more strongly than ever.

A spontaneous journey brought all of this to my attention. Hekate, standing there, nodding Her head, speaking without words, telling me this is my path now, a branch from the old tree, a way through the forest that I must take. Hestia has given me a new flame to merge with the old, I cannot turn away from it, refuse it. It is not in my nature to refuse the gifts of these Artes.

All of this is causing change in the mundane world. Old acquaintances are becoming new friends; old friendships that have grown stale are drifting away like crumbs in the wind, without regret. Ideas are forming, coming together into creation; thoughts run madly all the time while sleep evades me. Of course, I know that things will fall into place, smooth out. I also know this is what must be endured if I am to make progress. I must let myself be taken, it is the way of the priestess.

Tis the time of the Season. 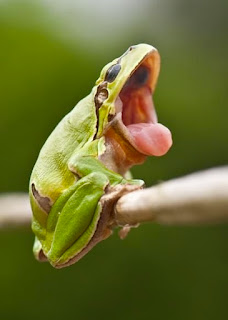 Very interesting! Today I pulled one of the Amulets of the Goddess to post on my LadySpell Artes facebook page. What did I choose? The Frog amulet!

If you read my post about our Ops ritual, we had a frog chorus raising voice through the invocations and then a frog jumped and clung to the glass terrace doors during the ritual.

Last night, actually early this morning, I was playing on Pinterest - love that - and I kept coming across frog and toad images! So I added a new board, Frogs & Toads.

Now, here frog is again! Time to speak out, my sisters. What have we all to say?