At the tender age of 19, Mary wrote Frankenstein, or The Modern Prometheus. I am told the 1818 version is the one to read as opposed to the "sanitized" 1831 version. This was a time when women generally used "By A Lady" instead of their real names when publishing. Mary went on to write other novels, short stories, biographies, and travel books.

Born in 1797, she is the daughter of the early feminist, Mary Wollstonecraft, author of AVindication of the Rights of Women, who died from complications of Mary's birth. Mary eloped with poet Percy Bysshe Shelley in 1814, and married him in 1816, after his wife committed suicide. They had four children, three of whom died in infancy. After Shelley's death, she went on, in 1830, to edit a collection of his poems, among her other writings. She began a biography of her famous husband, but died in 1851, of a brain tumor, before finishing it.

I wonder if she had any idea how famous Frankenstein would become. 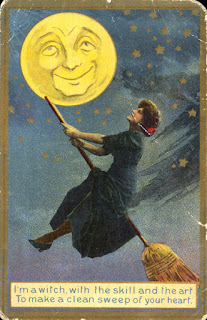 Here we are, the end of August already! And... a busy month it has been; working with my apprentices, a true joy as we have become close buddies; attending to powders, potions, magickal soap, snake skin, among other items for my little business, LadySpell Artes; jam making, and the usual stitching. Time goes more quickly than ever it seems, but I am so looking toward Autumn. It is my favorite time. I really need to get out of South Florida and get to somewhere with more obvious seasonal changes.

Early last week, just before we were bombarded with a tropical storm, we were experiencing almost daily thunder storms. One particular storm was so intense, I grabbed a pitcher and set it out in one of my hedges to collect the storm water. I managed to collect a nice amount that just vibrated with that storm's energy. I added a item or two for preservation and it sits in a bottle on Hekate's altar. I still have some work to do with it, but it is coming along fine. Nothing like a little potion making to set one's soul to singing.

At the shop I have been busy with all manner of spiritual and magickal counseling; so many folks believe themselves to be cursed, haunted, and just down on their luck. I am always happy to help, but it is sometimes a little wearying. However, then, in come my gals who are just looking for love and that brightens things up. Money is the other issue, we all seem to be working those candles for that - and it seems to be working! A friend won about $5000.00 in the state lottery! She worked hard for it and I am so happy for her. Another friend, who has worked very hard to make some changes for her and her family, has come through with great blessings. She came in to thank me, saying she knows it is me, but I informed her that while I may have advised, she did the work, she made the magick happen.

Speaking of money, the apprentices and I honored Ops on Friday night, a day before Her actual festival. We asked Her blessings on candles for various works, our creative and work-related endeavors, love and health, and of course, prosperity. Due to rain, we worked indoors, but with terrace doors open letting in the storm energy. Funny, the frogs outside rose up such a chorus at certain points in the ritual. I invoked my matron goddess, Hekate and they seemed to go crazy.  The energy during the ritual was intense, bringing emotions to the surface, and sealed our connection to each other and the Goddesses.

At one point during the rite, a frog jumped onto the the glass terrace door, bright green, and just hung there throughout the rest of the night. An omen, I think. It reminded me of the Frog amulet in Nancy Blair's Amulets of the Goddess. The frog is a favorite witch's familiar, and, according to Nancy, was sacred to the Egyptian goddess, Heket, known as the midwife to the gods. Nancy also mentions in her book that the word toad, in many languages, means witch or prophetess - interesting. She is thought to possibly correspond to Hekate, as well, so the appearance of the frog while invoking Hekate is certainly telling us something. The Frog amulet, when chosen, is about speaking out, speaking your truth, expressing yourself; who you are is important; a wise woman doesn't remain silent to protect others' shortcomings - rock the boat, make waves. The Frog amulet represents a vessel of transformation and that is certainly what has been happening in all three of our lives. More and more interesting.

On a mundane level - the jam making, or more specifically, fruit butter making is progressing. I snagged some wonderful peaches and made a lovely batch of spiced peach butter, nine half pints - oh yummy. Of course, I blessed as I stirred and added my Reiki symbols for good measure. That jam will make nice gifts at the Winter Solstice, although we've already dipped into one jar. That endeavor took place on Tuesday, then I worked some extra days at the shop the rest of the week, but planned to stop and get some plums I had spied while at the grocery store earlier in the week. I had planned to make the plum butter Sunday, but we got news of a tropical storm, Isaac. Well, I had some preparations to make, but most of the hurricane readiness was done back in early June; we aways prepare for the season. I decided to wait for the storm to pass since I didn't want to get stuck half way through the process if the power went out. Well, Sunday and Monday it blinked a few times as the storm pounded the windows and the wind whipped around Toadstool Condo, the cable went out - there went internet access, but we've come through just fine. It rained a pounding rain all day and night Sunday and even early Monday. My consort hasn't been out to check the strega-mobile and his truck for any damage as he is coming down with a cold, but I don't expect any issues!!! A cold, one of those summer colds, during a tropical storm! In any event, plum butter making shall commence tomorrow, actually later today.

On the stitching front, a tribute to Hekate is being stitched, and I am finally able to work on Salem Remembered again. I had lost one of the chart pages and couldn't find a replacement anywhere. You may recall my mentioning last year that the designer, Lisa of The Primitive Needle, died when swept away in a flash flood. I was working on another of her designs at the time - I have many - and it was difficult finishing that piece. I finally tried a few months ago to replace the chart, but no luck. A very nice gal at a needlework shop I had never purchased anything from, offered me hers when I told her what had happened. I will now be able to get that done and am very grateful to the generosity of this needlework shop.

Now... the blue moon! I have another rite for that, then the Autumn Equinox and my version of the Greater Eleusinian Mysteries!!! Ah, the apprentices are in for a magickal ride! (cackling madly!!)

Who knew? An interesting footnote in the history of women's undies!