The Lady of the Sioux 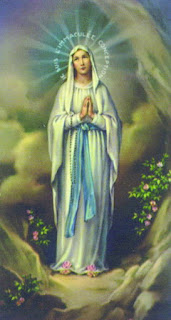 I recently came across another "Mary Story" - as I call them. These are  stories, in my mind, where the Blessed Mother, Mary is greatly honored, but that reverence in likely rooted in the original traditions of the culture into which she has been incorporated by the conversion to Catholicism.

The Sioux, or Lakota, according to a source at Our Lady of Lourdes Mission in the hills of Sioux/Lakota territory in South Dakota, are very dedicated to the Blessed Mother, Mary. The members of the mission and  the children who attend St. Joseph's School, gathered regularly to recite the rosary. Various holidays, during the Marian year, are celebrated and special dedications are made. The Feast of the Immaculate Conception is one such celebration, another is the crowning of the Lady's statue which includes presentation of paper flowers by the children and the singing of hymns to Her such as "O Mary, We Crown Thee With Blossoms Today - Queen of Angels, Queen of the May." Pilgrimages to Our Lady on the hill were made on Thursdays for various intentions. The rosary was recited and hymns to Mary were sung. The statue was adorned with flowers and kept clean by the children. I am not sure if these traditions are still kept at the school and mission. Some of this reminds me of various goddess-honoring traditions found throughout the world. Most recently, some of us celebrated the Vestalia which included cleansing of Vesta's statue as well as the presentation of offerings and a libation. I do the same for Aphrodite, Athena and other goddesses. Cleansing Their statues, generally in rosewater or other appropriate solutions, then making offerings and reciting invocations, hymns, and other prayers.

The mission compound was built in 1926. The story of how the mission and its dedication to Mary came to be has never been historically verified. Supposedly, also, there was a famous painting of the Lady in the grotto, but the only painting in the mission is one of Our Lady of Lourdes, likely painted by one of the old Sioux Indians, according to the information available.

The story of the Lady of the Sioux was supposedly told by the granddaughter of an old Indian woman. Her grandmother, she told, was walking along the road past the mission one day. Upon seeing the grotto on the hillside, she remarked: "Oh, I see the Lady is still there." When asked what she meant by "still there," she told how years ago, long before the mission and grotto were built, she was coming along that road and saw a lady in white standing up on the hillside exactly where the grotto now stands, looking just the same.

Unfortunately, according to the source at the mission, the granddaughter, like many Sioux, has moved away from the reservation, her name is unknown and the story cannot be verified. Not much was ever made of the story by the church, however, it continues to be told.

Our Lady of the Sioux grotto is located at St. Joseph's Indian School in Chamberlain, South Dakota. They have cared for and educated many children who were undernourished and ill when they first began attending the school in 1927. Today, children of many faiths attend the school, the majority, 61%, being Catholic, and include children who are victims of abuse and poverty. The school serves nine South Dakota reservations and other states, as well. The children are taught, in addition to the usual curriculum,  the Lakota language, traditions and culture.


It is interesting how this place has been able to return to teaching and honoring Lakota culture while continuing the traditions of Catholicism, which many Native Americans practice.

The windows can be seen here:
http://www.stjo.org/site/DocServer/Stained_Glass_window.pdf?docID=301
Unfortunately, the pictures are quite small, however one can clearly see them and there is a brief explanation with each. 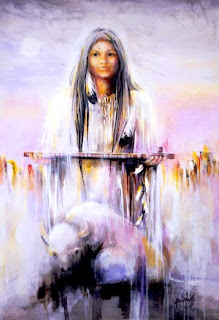 After reading about this, I wondered if the "White Lady" seen by the old grandmother was really White Buffalo Woman. White Buffalo Woman is sometimes described as wearing all white and others as wearing rainbow colors. Here again, as in many cultures where Catholic missionaries traveled to and lived, we can see a blending of both traditions, the substitution of a goddess with the Blessed Mother, Mary. As in Catholic/Christian culture, the Sioux were patriarchal. An example of this is that women were not to walk in front of men - sound familiar? Yet it was White Buffalo Woman who gave the sacred buffalo calf pipe to the Sioux and taught them how to live. "Before she came, people didn't know how to live. They knew nothing. The White Buffalo Woman put her sacred mind into their minds." (Crow Dog, a medicine man) White Buffalo Woman first appeared in human form, it is told, but also appeared as a buffalo - an albino buffalo. Here we have the "white lady" seen by the old grandmother. Patricia Monaghan includes White Buffalo Woman in her list of Mother Creator, Great Goddesses, which seems appropriate,  teaching her children how to live is exactly what a mother does. Here, in a patriarchal culture infiltrated by another patriarchal culture/religion, we see a great honoring of the feminine, the Mother Goddess.  It is not surprising, considering the extreme reverence paid to White Buffalo Woman, that the Sioux would adopt and show the Blessed Mother, Mary, that same reverence.

This is a small section, showing the Muses, of the painting, The Parnassus, by Andrea Mantegna, painted in 1497.

Ah, this magickal time! MidSummer approaches and with it the turning of the year, the Waning time. I almost breath a sigh of relief. I am very much then waning witch. So, here is to the shorter days, the darkness coming sooner, the dark magick coming more fully alive!


The Queen of the Fay

Are you ready for the magick and the mystery? So... let it begin! 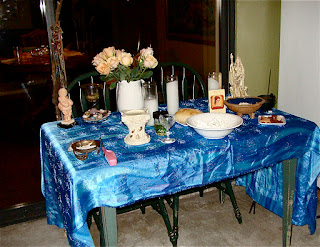 The main altar with offerings, libation, a representation of the Great Mother and another of Hekate.

Saturday evening I celebrated a Vestalia ritual with four friends. It was a lovely ritual, made more beautiful by the wonderful women who joined me in this annual rite. I honor this festival on each of the nights of June 7th through the 15th, so it was a special treat to join with my friends, all dedicated priestesses and witches of many years experience. We did have one young woman who is rather new to our ways, but she has shown herself to be very dedicated and was very much an asset to the rites. It was a pleasure to be with all of these friends for such a special evening.

After the rite we got a little wild! A late supper, simple but delicious, was followed by much merriment and laughing. I don't know if it was the very sweet, fruity champagne or what, but we let loose. The result of all this was a special new rite call the Rite of the Lettuce Leaves - but I'm not sure what it is really about. I can say that somewhere there is a photo of one of the priestesses kneeling in front of me receiving the blessing of the three lettuce leaves which I hope is never published!

Despite all the silliness and fun that followed the Vestalia rites, the ritual itself was very moving indeed. We blessed the space, processed with our statue and bathed Her in rosewater, chanted and made our invocations, burned a very fine, handmade amber and vanilla incense (Fred Solls) that was so beautifully aromatic, certainly a fit offering. We built a blazing ritual fire and then burned our offerings, torn pieces of the Mola Salsa, herbs, and barley. It was very hot and humid, but it didn't seem to matter, everything was quite perfect and we were very much lost to the world.

And so... I continue this festival on my own, but with lovely memories of a special night gathering with daughters of the old ways. 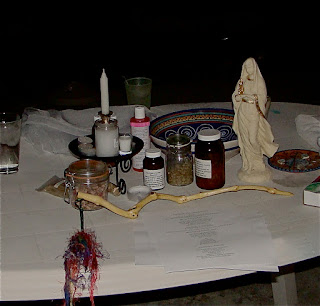 The working altar where we bathed the statue before taking Her to the main altar. Here we blended our herbs and lit new candles, from my perpetual hearth flame, which will be used at our hearths and stoves through the year.