Today is one of two days each year when the temple of the Roman goddess, Bona Dea, was dedicated with special rites. These rites were strictly for women and facilitated by the Vestal Virgins. The other day was May1st.

Bona Dea watches over women, bestowing protection, healing, and fertility of all types, upon us and the Earth. Depictions of Her usually show Her with a cornucopia, representing plenty and fertility, as well as a serpent, representing renewal.

Men were forbidden to attend  or even glimpse these rites. Cicero wrote that any male discovered observing the rites could be punished by blinding or even death. In the year 62 BCE, the rites were hosted by Pompeia, the wife of Julius Caesar. The politician, Publius Clodius Pulcher, was caught, dressed as a woman, violating the rites and, purportedly, attempting to seduce Pompeia. This led to Caesar divorcing her, for "Caesar's wife must be above suspicion". The rites had to be repeated and Clodius was eventually acquitted due to his political affiliations.

More can be read here including how to conduct a modern rite, as well as an invocation and a bit more information:
Witch of Stitches/Bona Dea

The truth is, we know very little about these rites so we improvise, which is what I do, honoring Bona Dea, The Good Goddess, to the best my heart has to offer. 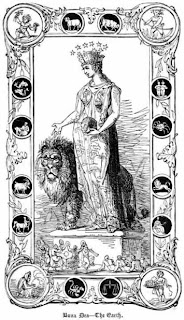