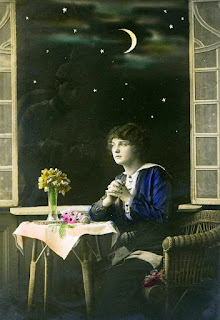 (image courtesy of mariesfreebies.blogspot.com)
A friend sent me an article to peruse about why Wicca is not Celtic as many Wiccans and Pagans believe. This set off a whole discussion with myself about how modern Pagans practice their spiritual paths and the claims some make. I am not and have never been Wiccan. I am a hard polytheist, Goddess-oriented, leaning heavily towards the Greco-Roman pantheon, but not exclusively. I believe in many goddesses and gods, not archetypes as some Pagans do, but that They actually exist as individuals. I am a witch who practices the sorcerous and shamanic artes. My beliefs are just that, mine and I make no claim that they are in any way better or worse than other Pagan's. I make no judgement of other Pagans' beliefs or practices, unlike many on a similar path - fundies and the holier than thou are everywhere. OK, that's a judgement, but hey, I'm human! There are, however, in my opinion, some very silly ideas out there about modern Pagan beliefs that are simply not accurate , as there are within any spiritual/religious group. I am not alone is this assessment. One commonly held belief is that we Pagans follow an ancient religion. In reality, we do not; at best we attempt to reconstruct, based on available historical and intuitive information, a way to honor the goddesses and gods we believe in. Or... we have created a new spiritual road that many have taken to - similar to what has happened before in other belief systems. All religions began with someone's idea about the spiritual, again, in my opinion.


At some point the Pagan population, I hope, will come to the understanding that while we honor the Old Ones, we are not following some ancient path that has been in existence for thousands of years. Our lives are completely and utterly different from these ancestors who believed in these same deities we do, therefore our experience of the spiritual cannot be the same. There are, in fact, so many differences that to say that we do is simply not accurate and nothing will make it so. We can honor those same deities, we can attempt to duplicate some ritual ways, but ultimately our personal experiences of spirit is very different. Also, we can not know completely how these people conducted their rites or exactly what it is they felt about the gods. We can only do our best to somewhat reconstruct a variation  and be as true to the goddesses and gods and our spiritual selves as possible.

For example, I will never know what the Eleusinian Mysteries actually were. We know something of them, but much is unknown -  yet they remain very important to me. I can surmise based on endless and ongoing study, but, in truth, I will never know for they were completely secret and participants were oath-bound on penalty of death. So what do I do? I could, as some sternly exclaim, not attempt to honor those mysteries, their feeling is that it is somewhat sacrilegious to try.  However, I don't agree with that because I am constantly drawn to them, there is a reason for that. I won't give up. I don't claim to know what I really don't - deluding myself that such and such goddess or guide gave me the information. I base my practice on intellectual, emotional and spiritual data, so to speak. I take what I do know, based on historical and archeological evidence, combine it with what emotionally, spiritually and intuitively I am drawn to do and finally, evaluate the results. If it brings spiritual satisfaction and some sort of result that indicates to me  I am on the right path, I continue along. If not, I make adjustments, but keep searching, moving along that road to wherever it takes me. And there are many roads with partially hidden paths to turn off onto - some lead nowhere and one must turn back, others lead to a wise one's cave.
This path I, and those like me, have chosen, is constantly evolving as we learn and experience our deities, the spirits, the Otherworld,  which is how it should be. Nothing in this universe remains the same. All is, one hopes, growing, blossoming, dying off, returning to seed and once again sprouting into creation, most especially ourselves. We keep searching because we need to, we are meant to... or, at least, some of us are.
Blessings nine!
at 10:36 PM