Goddesses and the Nine Nights 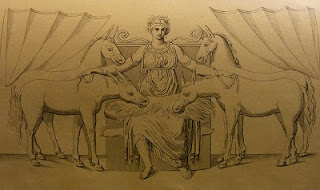 Yesterday, December 18th was the feast day of Epona, the Gaulish/Celtic goddess of horses, who was adopted by Roman soldiers in ancient times. The Romans were, contrary to what many believe, very accepting of other religious beliefs, incorporating various foreign deities into their own pantheon. Her name, in Gaulish, means"Divine Mare" or "She who is like a mare." She was also a goddess of fertility, abundance and rebirth.
Epona is associated with horses and was worshiped primarily by those whose livelihood depended on horses, foals and mules, such as soldiers, carters, stables hands and grooms. Her shrines were found in homes and stables, with statues and plaques depicting Her seated on a horse sidesaddle or surrounded by horses. Sacrifices were made to Her in the Roman manner; libations of wine, offering of incense, animals and roses.
Epona is also a goddess of dreams and nightmares therefore She would be the Lady to call upon when in distress from night terrors or for assistance with dream divination and interpretation of those dreams. Epona could also assist one when manifesting a new direction or path in life.
For me, She was always about the dream world; it was there that She most often made Herself known to me when I first heard the call of the Goddesses. Earlier, I offered incense and rose petals in Epona's honor.
In addition to this pleasant endeavor, I also celebrated the third night of my Nine Nights of the Winter Solstice Hallowing. The libation and offering have each received a third addition, cinnamon for the libation and actual cinnamon bark, harvested and brought to me by a friend just returned from travel, for the offering. The night before, my second night,  I added oregano to both. Another bayberry candle is also burning for our Winter Solstice spell. The scent of bayberry, balsam, pine and now oregano and cinnamon fills my home; a delight to our olfactory senses!
Later tonight, in addition to my forth night of winter solstice honoring, I now enter the second set of three nights, known as deep night, I will also honor Ops, Roman goddess of abundance, fertility and success. I will make an offering of bread and apples, and a libation of spiced, sweetened wine, in Her honor, requesting continued fruitfulness and abundance for those I love and myself, as the Sun returns. May Her blessings be upon you as well. 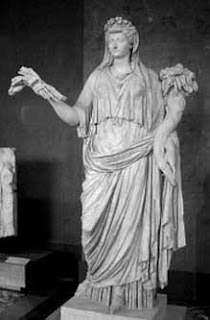