The Nine Nights of the Solstice Begins! 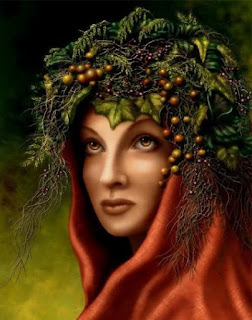 Earlier this evening, I began my Nine Nights of the Winter Solstice Hallowing. This is the way I honor the Winter Solstice and the Goddesses I am dedicated to. As explained in my article about this ritual last year in Goddess Pages, I spend some time each evening making invocations and offerings, lighting a few candles and,  on some evenings,  doing meditation and trancework. I felt intense connection with the Goddesses and Spirits tonight, down into my very deepest being, an ache in my heart. Dedicating these nine nights, no matter how busy my mundane life may be, centers and brings me to a sacred place within myself. I am very blessed to be able to do this. I felt the magick, the air itself was like electricity.


Tonight, as I welcomed the season, I recited the Blessing of the Solstice Tree as well as making invocations to Hekate, Persephone, Demeter and the Muses Nine. An offering of cinnamon/clove and winter pine incense was made as well as the beginnings of a specially prepared brew, which was left at my altar.


My libation brew will be made over the nine nights. Tonight I poured Strega Liqueur into the libation cup and will add an additional item each night. The libation will be poured onto the ground at my hedge on the ninth night. I am doing the same with  my offering. Into the offering bowl, tonight, I placed barley; over the next nine nights, I will add another offering, placing it at my hedge on the ninth night, as well.


I had intended that I would perform my Bayberry Candle Spell for only three nights, beginning the night before the Solstice - I truly felt directed to do that. However, at the last minute, I felt a change and knew I would begin the casting tonight, working for all nine nights . I therefore gathered my herbs and candle, candleholder and coins. I again felt a great increase of energy as I began and so it went, the mundane world faded and I was truly in the spell. I have been casting this spell every Solstice for many, many years and we always have what we need when we need it. Is it really a spell or, perhaps is it an offering?

Over the nine nights I will journey to Hekate's Gate, the realm of Persephone in Winter and   finally Hekate's cave. The first three nights, Twilight, are the journey into the mound and down the stone steps that lead to the Underworld, so I finished my rite with some trance work, beginning that journey down and within, crossing the hedge and entering this stairway that leads down from the doorway to the mound . Last year I received some gifts along the way and tonight was no different - a herkimer diamond, bits of some root and some earth from the walls of the stairway. Now to figure out what they mean and why they were given.


Some folks may wonder and even disapprove of my sharing these details. That is their issue and not mine. There are no secrets and whoever needs to read this will find it. And that is the point, so others, who may need to know, may learn something from it, may find something in my writing, will have it. I hope those who read it reap some good from the sharing.