So... in my post yesterday, last paragraph, I made the statement that I would NOT grate any part of my fingers while preparing the potatoes for latkes - and... I did not. No, instead, while peeling the last potato, I sliced into my right index finger in two places. One slice was so deep, I ended up in the emergency room for stitches. The second slice only required a butterfly. I was sent home with a splint (because the big slice is across the joint), pain meds and an antibiotic. Thank the goddesses it was my right hand, I can still stitch!


The potatoes, for some reason of their own, kept slipping out of my hand, flying across the counter. Being left handed, I have an odd way of peeling - more scraping away from my hand, but the one, more serious cut, was toward me, a nice long slice with a deep hole. The other was at the tip,  can't figure out how I did it. Needless to say, we did not have latkes last night. My darling husband did what all good Jews do when their wives can't cook - he went for Chinese take-out. Ah, you may ask, didn't you go out for Chinese the night before? Yes, indeed we did - we love Chinese food. I will leave you with this little joke, a favorite of ours:


And that my friends is the end of my story. Tonight, latkes, grated in the food processor. I'll just leave it at that and make no promises about anything! 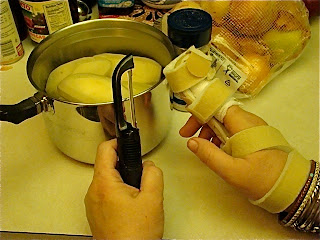 A photo of the victim, culprit and supporting cast!
Blessings nine!
at 9:03 AM