So... I hope everyone had a lovely Thanksgiving. Mine was nice. We went to my husband's cousin's club - an incredible spread - turkey, ham, salmon in a cider glaze and probably the best prime rib I've ever had. There were all the traditional trimmings - stuffing, sweet potatoes, mashed potatoes, gravy, real cranberry sauce, green bean casserole and other side dishes I didn't/couldn't try.

A good third of the various desserts were chocolate - chocolate covered everything - pretzels, fruits of all kinds - grapes - I couldn't eat those for some reason. I only took one because I thought it was a truffle. Why chocolate covered grapes seem so weird to me I cannot tell you. There were also kiwi slices, pineapple, strawberries and, believe it or not, carrots. The carrots were dipped, as were the fruits, half in chocolate. No, I didn't have any chocolate covered carrots or fruits. If I'm going to overdose on sugar it won't include slices of fruit.

There were cakes, pies, cookies, candy, custards... on and on - enough to overdose on in the most spectacular fashion. The coffee was especially good and finished off the meal nicely. I showed off photos of  my little, cutest baby on the planet, grand nephew over that great coffee. He's six months old and is standing already, yelling for his dada. His father's response to the post on FaceBook was "Oh sh*t." The older adults of my family - me included - are laughing madly! 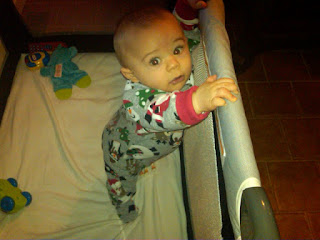 There was one big problem on Thanksgiving; my husbands cousin, the host of our dinner, did not or actually could not attend - he has kidney stones and was passing one as we feasted. Really. His wife was with us and kept tabs on him via cell phone. He has many more stones. My husband went through this a month ago. A kidney stone gives men a taste of giving birth, or so I am told, never having experienced either - and by the blessings of the goddesses, never will. We spent the remainder of the evening with my husband's aunt, 89 and sharp as the proverbial tack - seriously, she's quite brilliant and we love spending time with her.

My mother went north this year to be with her youngest sister as my uncle, her husband, died on the 14th. I can remember being a very little girl when he and my aunt were dating and my sister and I both wanted to marry him. We were only 4 and 5 years old, I think. He was quite wonderful to us, but in our teens, teased us unmercifully. I married a man very much like him in that respect. They became good friends. My uncle was a great fan of Frankie Valle and the Four Seasons, so I've always loved them too. Very strange, my aunt and uncle became engaged in December, 1963. Many years later, Frankie Valle and the Four Seasons recorded "December, 1963, Oh What A Night" - now that is pretty interesting. We're very sad and miss him. I hope he and my dad are having a heck of a time together.

Into the shop Friday morning - the first time in almost thirty years that I've worked the day after Thanksgiving. Quite a day, as was today. Even in the magickal world, Black Friday and Small Business Saturday are important days. People certainly bought gifts for others, but we still sold a lot of ritual and magickal-type goods, the usual. I went to the grocery store early Friday morning to buy mineral water, but otherwise I didn't want to be near shopping centers, malls, etc. other than my own little place.

I only performed a short ritual for the Dark of the Moon and left offerings at the hedge, nothing very elaborate. While dedicated to Hekate, I am hearing the call of Neolithic goddesses once again and researching and experiencing some different ritual. I am also experimenting with some different magick. Someone from a cyber-group I belong to called Hekate the flavor of the month because so many people seem to be drawn to Her. She does seem to be making Herself known to many, but I think that expression, flavor of the month, is rather disrespectful. Neither here nor there for me, but I do feel She is steering me in other directions. I will just have to see.

Sunday I will begin getting the Toadstool into order for the winter holidays. There are some new magickal powders that need making, spell kits for Solstice gifts, winter pot pourri to mix up and other holiday tasks, including the Christmas pudding - an apricot delight with a couple of pounds of butter in it. This pudding of all puddings will sit in the fridge, being doused in rum every Sunday, until Christmas Eve. On that night, with one more good dousing, we set it alight and then pour on the potent hard sauce and enjoy. Sensitive individuals have been known to get drunk on that pudding! Pair that pudding with my Sleigh-Ride Punch - hot and also full of rum, well... that's what brought on the screaming with laughter and playing with those funny little ball and basket things until three AM last Christmas!

The winners of my give-away should have their packages sometime during the week. I am preparing for my Divine Feminine Discussion and Meditation group at the shop on Tuesday. So... there we are, up to date and ready to move along. What a ramble!!! And no rum was involved, I swear!

Re: River of Stones, here's another:


Rose quartz - weighing and pricing for the shop - what a life!
Cotton candy pink crystal, rainbows peeking from within, here and there,
the energy of love vibrates all around me.