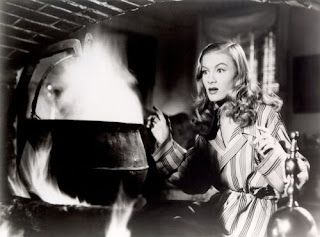 This recipe is a sort of hodgepodge, very forgiving, adjusted over the years, adding this, one year and that, the next... so just go with it. It is very, very yummy! Read through the entire recipe before cooking since it is a hodgepodge and you want to make sure you have everything you need.

Wash the squash and poke some holes in them, then bake, along with a handful or two of fingerling potatoes and a couple of large peeled, cored, and quartered apples, all having been tossed with  some olive oil, in a 350 degree oven until just tender, about an hour. I cool and then cut the squash in half, scrap our the stringy stuff and seeds, peel off the skin and place in a large dutch oven or soup pot, then use a potato masher and mash the squash a bit, leaving it somewhat lumpy. I add the canned pumpkin, mix it well with the squash, then add a good chicken or vegetable stock; I start with a quart to a quart and a half, depending upon how thick I want the soup - I want it nice and thick. I then add the potatoes whole or halved and the apple which I coarsely chop.

In a frying pan, I add a couple of good sized pats of butter and a splash of olive oil, heating over medium heat. I then add 3 chopped onions and 4 celery stalks, sliced, cooking until the onions are browned a bit and the celery is cooked. I then toss in 6 cloves of garlic, chopped coarsely but not minced and let that just cook until fragrant - don't brown the garlic, it will get bitter. Add these veggies to the soup pot and bring to a simmer. Add ½ - ¾ cup of barley (quick cooking is fine) when the soup is very hot. Cook over medium low heat for about an hour. Check the thickness, add more stock if the soup is too thick for your taste. Taste the barley to make sure it is chewy but not hard.

Season with salt to taste, as well as about a 1/2 cup of real maple syrup, grade B if you can get it. Add ¼ teaspoon of group cloves, 1 teaspoon of ground cinnamon, ¼ teaspoon of ground allspice, then mix well. Take a taste and adjust the seasoning and maple syrup to your liking. I also add about a ½ cup of apple butter and blend in well. This is a very forgiving soup, adjust it as you like, add anything extra including more stock to thin if too thick. I have left out the barley and added cooked ditalini instead, but the barley gives it a very nice, traditional flavor. You can also add browned and cooked stew beef or ground beef, shredded chicken or pork, or all three. If you decide to add beef, use a good beef stock for a very rich flavor. I've also added cup of sherry instead of the apple butter and that was quite good too. Do as you will, cackle - just a little witchly humor! ;)

And there you go... a lovely seasonal soup/stew, full of autumn flavors, very easy and very satisfying. I like to serve it with corn bread and plenty of butter. A dollop of sour cream or a splash of heavy cream adds a nice touch too.  I would love to hear from anyone who tries this recipe, how you liked it, and how you made it your own. 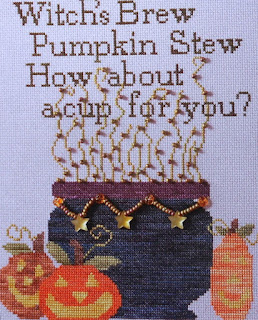 This design is from an old magazine, no clue who the designer is.
Please advise if you have info.
at 12:18 PM