Festival of the Nymphs 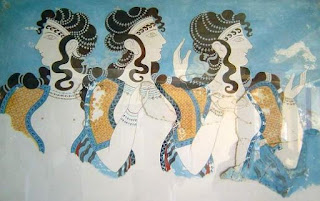 Orphic Hymn to the Nymphs
Nymphs, daughters of great-hearted Okeanos,
You dwell inside the earth's damp caves and your paths are secret,
O joyous and chthonic ones, nurses of Bacchos,
You nourish fruits and haunt meadows,
O sprightly and pure travelers of the winding roads
Who delight in caves and grottos.
Swift, light-footed, and clothed in dew
You frequent springs; visible and invisible,
In ravines and among flowers,
You shout and frisk with Pan among mountain sides.
Gliding down on rocks, you hum with clear voice,
O mountain-haunting sylvan maidens of the fields and streams.
O sweet-smelling virgins, clad in white, fresh as the breezes,
With goatherds, pastures and splendid fruits in your domain.
You are loved by creatures of the wild.
Tender though you are, you rejoice in cold
And you give sustenance and growth to many.
O playful and water-loving Hamdryad maidens.
Dwellers of Nysa, frenzied and healing goddesses who joy in spring,
Together with Bacchos and Deo you bring grace to mortals.
With joyful hearts come to this hallowed sacrifice and in seasons of growth
Pour streams of salubrious rain.
(tranlation Athanassakis)

The Nymphai (or Nymphs in English) were minor nature goddesses which populated the cosmos. Although they were ranked below the gods, they were still invited to attend the assemblies of the gods on Olympos.

The Nymphai presided over various natural phenomena: from springs, to clouds, trees, caverns, meadows, and beaches. They were responsible chiefly for the care of the plants and animals of their domain, and as such were closely associated with the prime gods of nature such as Hermes, Dionysos, Artemis, Poseidon and Demeter. (from http://www.theoi.com/Cat_Nymphai.html)

Another interesting article can be found here: http://www.wildivine.org/nymphs_worship.htm

Tonight I will make offerings to the Nymphs, guardians of all nature, at the lake and the hedge. For a libation, spring water sweetened with honey; offerings will be some pretty beads and shells that I have saved for them as well as a little cake flavored with herbs.

Guardians of the Land, of all Nature,

Know that you are remembered & revered.

Know that you are beloved.

Accept these offerings truly given by

A Daughter of the Old Ways.

Hear me and know my name.