First of Nine Nights of the Winter Solstice Hallowing 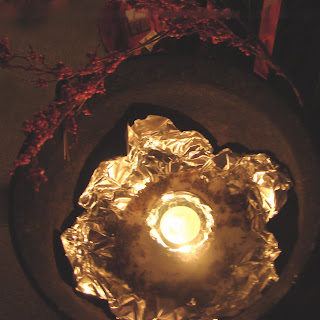 Just before midnight earlier this evening, the 15th of December, I began my celebration of the Winter Solstice, the first of nine nights. Each night I will offer prayers to the goddesses to whom I dedicate myself, a libation and offerings, prepare to welcome back the growth of light, and do some journey work.

I will spend three nights focusing on dusk or twilight, beginning the journey down and within. I will then move into three nights of deepest night where I will work some of my most intense meditative journeying. On the Solstice itself, I begin three nights of returning, dawn, coming back from within and beyond. This series of workings has been very fulfilling over the past few years so I set aside time to do this even with the busyness of the season. Even if I just have time to recite prayers and light my candles, I let nothing interfere.
I was first inspired to do this by reading about how another who is dedicated to the Greek pantheon, Hector Lugo, celebrates this time of year. His rites are called the Heliogenea and focus on the return of Helios over a period of three or nine nights. His rite inspired my own, but with the focus on honoring those goddesses I revere.
In addition to this, I also work a bit of magic; the lighting of a bayberry candle with a coin beneath and some herbs scattered around to bring prosperity and good health in the coming year. I learned not to put the herbs in with the candle when, about ten or so years ago, the whole thing went up in flames right in my apartment. Ah, well... fire lessons! All's well that ends well and the worst of it was a stern lecture from my darling husband, bless his understanding soul.
This spell can be performed in a variety of ways; begin, as I am, six nights before the actual Solstice and light a candle for nine nights; light a candle on the Solstice, light a candle each night, the night before, the night of and the night after the Solstice - or... any other way you like. The candle should be true bayberry, I use a bayberry cinnamon candle, the cinnamon giving the spell a little extra kick; or use any candle you have and anoint with a drop of bayberry oil. Use what you have. Place a coin in a candle holder, then work with your candle and place in the holder over the coin. I like to line the holder with some aluminum foil - silver for the goddesses and the moon. I then line my cauldron with another piece of foil and some salt or sand along with a scattering of herbs, such as bayberry, mistletoe and acorns, around the outside of the candle and its holder. When ready, I light the candle and chant the following nine times:
Upon this Solstice Season Night,
I burn this candle, strong & bright!
For me & mine, prosperity grows,
For me & mine, good health to us flows.
As comes the light, sprouts the seed,
By Hekate's hand, fulfilled is our need!
Or... chant whatever you like. Allow the candle to burn itself out. At the end of your spell, be it one night or nine, fold all the remnants up in the foil, place in a green cloth and tie with red thread. Hang the charm over you door, inside your home.
Blessings nine!
All written material copyright 1997-2009, E A Kaufman. Photo copyright E A Kaufman, 2009.
at 12:35 AM