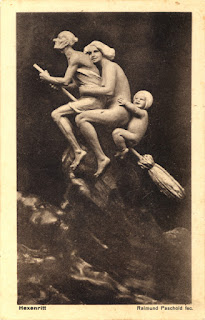 Here is a story from a book I recently obtained, "North Carolina Legends" which tells of the fear of witches even in later times, probably the 19th century. Of course, this is a story and we can hope the ending is just that, only a story.

Once upon a time, up in the North Carolina mountains, Jack was down on his luck, and he asked a miller for work. "Maybe you don't want this job," said the man, "because all my millers seem to die when they work here." Jack said, "I'd just as soon be dead than hungry and out of a job." The miller said alright, but that Jack would have to sleep and cook at the mill. That was fine with Jack.

That night he made a fire, baked some bread, fried some meat, and put his tin plate on the floor beside him to  start eating. All of a sudden the room got dark as pitch, and Jack went over to build up the fire. He sat down again and looked around. The room was filled with twelve black cats. The biggest one put out its doll (paw), and said, "Sop, doll, sop," then started sopping up the bread and meat in Jack's plate.

"You do that again and I'll cut your doll off," said Jack. The big cat did it again, and so Jack grabbed his knife and cut its right doll off. With that, all twelve black animals turned and scattered out of the mill in a hurry. The fire blazed up and Jack saw that the cutoff paw had turned into a woman's hand with a ring on it.

The next morning the miller was late coming by because his wife was sick and he had been to eleven neighbors houses to get women to come and nurse her. "Did you sleep well and get enough to eat last night?" said the miller. "Yes," said Jack, "except for one thing." And he told the miller what had happened and showed him the woman's hand. "Why, that's my wife's hand, and the ring is one I gave her yesterday."

With Jack tagging along, he went up to the house, glared at the eleven women, and told his wife to show him her hand. She pulled her left hand from the covers. "No, it's your right hand I want to see." She said she didn't have one.

"Why did you go down there last night?" he shouted at her. She said, "I didn't want you to have a miller. I wanted you to keep the mill yourself. And I got my friends and witched them into cats and went down there to put poison in his sop." The miller turned to Jack. "I've been thinking my old woman was in with a gang of witches, but I didn't know she was the leader of them."

Jack and the miller shut all the doors and windows in the house, and went out the front door, and locked it, and set the house on fire, leaving the women inside.

"Them twelve witches," says the story, "started crackin' and poppin', and ever' one of them was burnt plumb up." From then on, Jack and the miller didn't have any more trouble down at the mill.