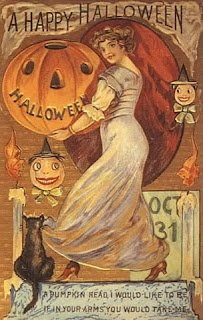 Candle divination was widely used for Hallowe'en in the early 20th century. By the 1920s, colored candles were available and this made the various candle divinations and games more interesting.

According to "Halloween, Romantic Art and Customs of Yesteryear" by Diane C. Arkins, candles were designated to represent months of the year then lined up on the floor with ample space between them. Fortune-seekers  would then leap over the lit candles one at a time; whichever candle was extinguished first foretold the month of marriage.

A single candle was leapt over and if the flame was undisturbed, this indicated that the year ahead would be free of anxiety and trouble. Those who knocked over the candle would have troubles in months ahead.

A group of colored candles were set alight on a tabletop. Seekers had to blow toward the candles three times from a predetermined distance. Those extinguished were said to foretell the traits of one's future spouse.


Candle of red denotes that you
Will win a spouse constant and true;
White denotes what e're his station
Your mate will have a fine reputation;
'Tis foretold by candle of yellow
He'll be a very industrious fellow;
By candle pink you are told
That he'll be handsome to behold;
And always, candle of green doth tell,
He will provide for you amply and well;
While blue proclaims with sure discerning,
That he will be a man of learning.

You can set up your own candle divination set with birthday candles in various colors. Using birthday candles is an easy way to give each participant a set; the candles that are blown out can be placed in a charm bag to hold the focus. The above meanings need not apply; set your own meanings. For example, green foretells a good year financially; blue for good health; pink for love; red for accomplishing goals; yellow for general positive energy and success, orange denotes creative energy; purple represents growth on one's spiritual path. You get the idea. Just spend some time focusing energy into the candles and the meanings of the various colors for your work.

Remember to use common sense and safety precautions around candles and fire.