Day 2 - How Did I First Become Aware of Hekate

I've shared this so many times. Although I have been practicing witchcraft since the early 1970s, it was not until approximately 1990 that Hekate began to make Herself known to me. It seemed everywhere I went, everything I read, every meditation, She was there. I realized something was happening and that I needed to find out if Hekate was calling out to me, making Herself know for a specific reason.

At that time, I did not have the internet to hop on and search for information about Hekate. Instead, I read books... Pagan books, books about ancient Greece, and mythology, whatever I could find, and meditated.The majority of what I read was Wiccan-based. I didn't have a lot to work with so I decided to perform a ritual to assist me in connecting with Her, in essence, ask Her what She wanted, if anything.

I cast my circle and called upon Hekate. I lit a black candle and offered some incense. I then stood and spoke to Her. I asked why She seemed to be everywhere in my life, was there something she wanted from me. I asked that She give me some sign if I was to devote myself to Her. Everything was very still, I felt as if I was out of the mundane world. Suddenly that feeling passed and I felt a hand on my shoulder. It started me because I thought my husband had come out of the bedroom, but when I turned, he wasn't there. I felt that hand so strongly, it was so real, I will never forget the sensation. I  knew Hekate was there and that She was calling me. I felt Her and I knew I would be Her priestess. There is, of course, more to this but I do not choose to share it. My life changed that night, let me leave it there.

In the many years since, my devotion to Her has become stronger and stronger. I could not imagine a life without Her and my duties as Her priestess. Yes, She has tossed me around, made me do the work I needed to do and other things She obviously wanted me to do. It has not been easy being claimed by Her, being Her priestess, but I would not change it. She does indeed reward those who honor Her. My life is Hekate's. 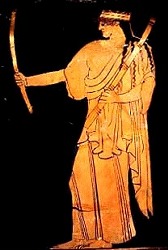