Day 28 - Something I Wish I Knew About Hekate But Currently Do Not. 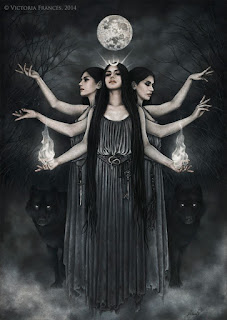 There are a couple of things I would really wish to know about Hekate: Her true origins, the myths untainted by patriarchy. Was She originally, as many goddesses, a great mother goddess Herself? Was She originally as involved in magic and witchcraft as She is thought to be today?

While these things matter to me in some ways, in others they ultimately don't. Hekate is, to each of us, whoever She chooses to be. There is no way I will ever know the answers in my lifetime. Certainly, I think about these questions now and then, but less than I once did. The reason for this is simple; I know who She is to me and that's all that matters.  If that sounds somewhat arrogant, I don't mean it to, it's just how it is. Again I say, to each their own.

It would be wonderful if there was absolute evidence about the goddesses' true origins, all of Them. But would it really matter for women? Personally, yes, universally, no. Patriarchy would still exist, denying the importance of the goddesses, as well as women, in history, in the creation of this world. And really, whatever Hekate's true origins, I am still Hers, I will always be.