I have decided to participate in the 30 Days of Devotion blog challenge. I found out about it through Galina Krasskova who found it here. The idea is to choose whichever Goddess or God one is devoted to and post each day according to the challenge. Since I have been devoted to Hekate for many years, naturally I am choosing Her. So here we go! 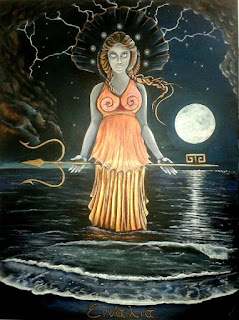 Day 1 - A Brief Introduction to Hekate

Hekate is the Cosmic Soul, a Titan who kept Her powers and dominion over sky, land, and sea, after Zeus defeated the Titans. She has been portrayed as a crone, likely due to Aleister Crowley, but She is more maiden according to Greek myth. A companion to Persephone and so closely associated with Her, some believe They are the same Goddess. It was Hekate who led Persephone from Hades to be returned to Her mother, Demeter. Although Hekate is known as a Greek Goddess, Her origins begin in Thrace (Asia Minor), where She was worshipped, it is said, by witches. She became known in Rome as well as elsewhere.

The crossroads and all liminal spaces are associated with Hekate. The ancient Greeks left offerings for Her at crossroads and placed statues of Her at their doorways and gates to their cities. She is of great assistance through any kind of transformational issues. Some say She waits at the gates of the Underworld and it is here She prefers to be.

A Goddess of witches, Hekate will... perhaps, assist one in magickal endeavors. She is a hard taskmistress and yet cares for those who honor Her. It is only in later times that She is seen as a darker deity. Hekate is a guide and a guardian. She protects those who call upon Her, especially from murder, magic, theft, the dangers of childbirth, and the hardships of life on the road. She is also a mediating figure, who intercedes on our behalf with the other Gods. She bestows many gifts upon those who honor Her, including magical abilities and prosperity.

Ways to honor:
Keep sacred the Deipnon and Her festivals.
Study magic and prophecy, particularly theurgy, as she is the patron of that art.
Go for walks at night, or among strange places.
Aid fellow travelers and strangers, especially if they have dogs. (Or are wild dogs!)


Appreciate the weird and uncanny. 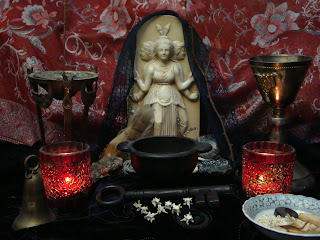