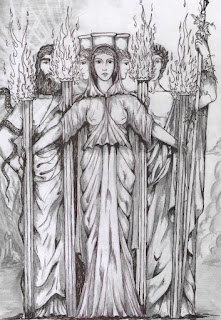 artist unknown, please contact me if you know the artist.

There are various myths about Hekate's genealogical connections. A very good source for this information is Theoi.com, probably the most complete as it is related to he ancient Greeks. This is what they have:

PARENTAGE OF HEKATE
I) PERSES & ASTERIA
Hesiod, Theogony 404 ff (trans. Evelyn-White) (Greek epic C8th or C7th B.C.) : "[The Titanis] Asteria (Starry One) of happy name, whom [the Titan] Perses (Destroyer) once led to his great house to be called his dear wife. And she conceived and bare Hekate." - Hesiod, Theogony 404
Homeric Hymn 2 to Demeter 19 (trans. Evelyn-White) (Greek epic C7th - 4th B.C.) : "Tender-hearted Hekate, bright-coiffed, the daughter of Persaios."
Pseudo-Apollodorus, Bibliotheca 1. 8 - 9 (trans. Aldrich) (Greek mythographer C2nd A.D.) : "The Titanes had children . . . Perses and Asteria of Hekate."
Apollonius Rhodius, Argonautica 3. 1035 (trans. Rieu) (Greek epic C3rd B.C.) : "Hekate, Perses’ only daughter (mounogenes)."
Lycophron, Alexandra 1174 (trans. Mair) (Greek poet C3rd B.C.) : "The maiden daughter of Perseus, Brimo Trimorphos (the three-formed)."
Diodorus Siculus, Library of History 4. 45. 1 (trans. Oldfather) (Greek historian C1st B.C.) : "We are told that Helios (the Sun) had two sons, Aeetes and Perses, Aeetes being the king of Kolkhis and the other king of the Tauric Chersonese, and that both of them were exceedingly cruel. And Perses had a daughter Hekate, who surpassed her father in boldness and lawlessness."
Ovid, Metamorphoses 7. 74 (trans. Melville) (Roman epic C1st B.C. to C1st A.D.) : "Now to the ancient shrine of Perseis [Hekate, daughter of Perses] she [Medea] made her way."
Cicero, De Natura Deorum 3. 18 (trans. Rackham) (Roman rhetorician C1st B.C.) : "If you think Latona [Leto] a goddess, how can you not think that Hecate is one, who is the daughter of Latona’s sister Asteria?"
Seneca, Medea 812 (trans. Miller) (Roman tragedy C1st A.D.) : "I see Trivia’s [Hekate's] swift gliding car . . . O Perseis [Perses’ daughter]."
II) NYX
Nyx (Night) as the mother of Hekate was probably identified with Asteria ("the Starry One").
Bacchylides, Fragment 1B (trans. Campbell, Vol. Greek Lyric IV) (Greek lyric C5th B.C.) :  "Torch-bearing Hekate holy daughter of great-bosomed Nyx (Night)."
III) OTHER
The Scholiast on Apollonius Rhodius, Argonautica 3. 467 says that according to the Orphic Hymns, Hekate was a daughter of Deo [Demeter]; that according to Bacchylides, a daughter of Nyx (Night); according to Mousaios, a daughter of Zeus and Asteria; and that according to Pherecydes, she was a daughter of Aristaios.
N.B. Pherecydes clearly identified Aristaios with the Titan Astraios (the Starry One).  Most poets make Hekate a daughter of night in some form, be that Asteria (Starry), Astraios (Starry) or Nyx (Night).

OFFSPRING OF HEKATE
I) VIRGIN GODDESS.
Hekate was described as a virgin goddess, similar to Artemis. In art, she was often depicted wearing a maiden's knee-length dress.
Apollonius Rhodius, Argonautica 3. 840 (trans. Rieu) (Greek epic C3rd B.C.) : "The only-begotten Maiden (Koure mounogenes) [Hekate]."
Lycophron, Alexandra 1174 (trans. Mair) (Greek poet C3rd B.C.) : "The maiden daughter of Perseus, Brimo Trimorphos [Hekate]."
II) SKYLLA
Hekate was sometimes identified with Krataeis, the mother of the sea-monster Skylla. She was also titled Skylakagetis (Leader of the Dogs), connecting her with the name of the monster.
Apollonius Rhodius, Argonautica 4. 827 ff (trans. Rieu) (Greek epic C3rd B.C.) : "[Kirke addresses her niece Medea :] `Nor let them [the Argonauts] go too near the hateful den of Ausonian Skylla, that wicked monster borne to Phorkys by night-wandering Hekate, whom men call Kratais.'"
III) KIRKE & MEDEA
Diodorus Siculus identified Hekate with the Kolkhian nymphs Perseis and Eidyia (the mother and wife of King Aeetes), and also with the goddess of the neighbouring Tauric Khersonese.
Diodorus Siculus, Library of History 4. 45. 1 (trans. Oldfather) (Greek historian C1st B.C.) : "We are told that Helios (the Sun) had two sons, Aeetes and Perses, Aeetes being the king of Kolkhis and the other king of the Tauric Khersonese, . . . Perses had a daughter Hekate . . . she married Aeetes and bore two daughters, Kirke and Medea, and a son Aigialeus."

In my personal opinion, since Hekate's origins are likely in Caria and Thrace, the ancient Greeks absorbed Her into their pantheon and these various relations were created. She is so ancient, who can know?