Day 6 - What are some other related deities and entities associated with this deity. 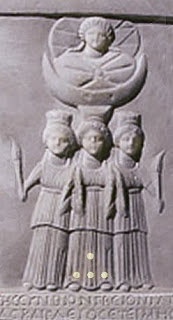 It's busy weekend celebrating my 60th birthday; out with the apprentices last night, dinner with friends tonight, and tomorrow the big day. I'm a little late posting this.

Artemis - Hekate and Artemis have a number of similarities. In August, we celebrate the Festival Of Hekate-Artemis or.... one or the other. Both are considered moon goddesses, both are maiden goddesses, although some identify Hekate with the Crone. Hekate and Artemis are guardians of women and children, both bearing the epithet Kourotrophos - Child Nurse. Hekate also bears the epithet, Agrotera - Huntress. Artemis is also called Huntress. Both goddesses have hounds (or dogs) with Them often in myth.

Persephone - Hekate and Persephone are both Underworld goddesses, and sometimes seen as one and the same. They both are guardians of the dead, but also have Their roles here in our world. Hekate rules over sky, sea, and land; Persephone returns to our world each spring to inspire Her mother, Demeter to bring forth all that is fruitful. Persephone is considered Queen of the Underworld. I see Her as Mother of the dead. Hekate guides the dead on their way to the Underworld. Her epithet,
Prytania names Her as Invincible Queen of the Dead.

Bendis - a Thracian moon goddess who carried two lances or lights, depending upon the myth. She had duties toward both the heavens and earth.  She is also identified with both Persephone and Artemis, as well as Hekate.