Day 25 -A time when Hekate has refused to help me. 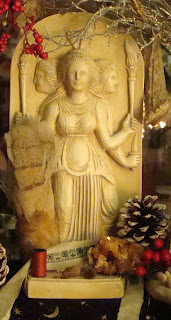 The time I feel most comfortable sharing regarding Hekate refusing to help me was several years ago when a worldwide group, dedicated to Hekate, came into being. A friend who also was and still is dedicated to Her and I joined this group and were very excited to be part of it. We truly felt that joining with others from around the world, celebrating and honoring together could only result in great things. But... no, definitely no.

Hekate stopped speaking to us, zero interaction, zero communion, just nothing. Dead space in ritual, confusion and mess in divination. This was experienced by both of us. We were bewildered, but finally figured out what was happening, divination confirming it. We left the group and I did a great deal of purification work as well as making many offerings, increased daily devotions, worked very hard to be very sure that Hekate knew we had gotten Her message. For some reason, She had decided we were not to be part of this group. And one night, Hekate let us know all was well. We both had felt that pieces of our hearts had been ripped out, so great was the pain of not having that connection with Her.

I make sure, when becoming involved with other groups - much smaller - that they are acceptable to Her for me. This wasn't the experience for everyone who belonged to the group, just us as far as I know.